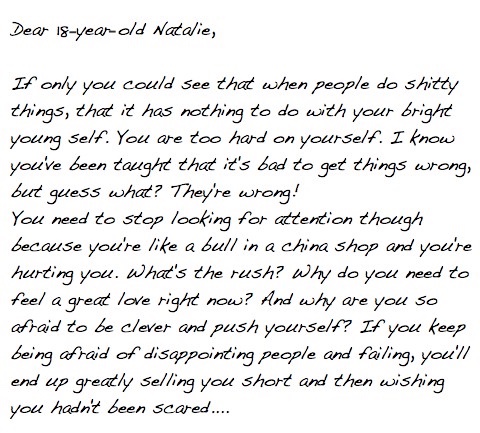 What you are doing during this whole process of tuning in to your inner voice, is growing you up. Right now, your inner and even outer critics have way too much sway in your life and it puts and keeps you in a 'child role' where as a result of making authorities out of these inner and outer critical voices, you regard you as lesser and allow them to have the power to direct and even dictate your life.

When you put someone on a pedestal, the only place for them to look is down.

When you allow others to be authorities over you, it affects the way in which you engage with them. Instead of being adult-to-adult, your mentality is that of somebody who is consciously and subconsciously trying to please so that they can be OK. Your inner critic in its quest to spare you from a bigger emotional pain, is regarded as parenting you or certainly as being an authority, but it's not. As you take up the child role, it then has the power to speak to you as if you're a child and this is someone who is not boundaried and is never pleased, so not only do you end up being demoralised and thinking that you're never OK because you never win its agreement or support (it has one function only and that is to be a critic whatever the circumstances). This child role is also exacerbated if there is a much younger part of you (your inner child) that wanted to be patented, wasn't or was not parented in a way that left them feeling loved, accepted, nurtured etc., knows that it's not getting it from the outer source but on some level continues to try to right the wrongs of the past via the inner critic. All this does is keep you small and it keeps you locked into the past because it's primarily a backing track and you're affording your inner critic a power it does not actually have.

It is as good as giving a cardboard cut-out or a hollogram that power.

Your conscious heavy-handed criticisms of you are also another way of keeping you small - you might think that this is a way of being a big grown-up but it's a warped way of parenting you so you're adopting an exaggerated parent role instead of an adult role.

Now, it is is important to parent you when you become an adult, in the sense that you are now your primary carer and while your parents are still your parents, they're no longer responsible for raising and parenting you; you are. You have to take over the primary role of providing nurturing, love, discipline and support....even if they didn't. None of us are born a parent and  we have to learn as we go. Don't let the fact that you might have been inadequately parented stop you from being there for you - inadequately parented or cared for does not mean you are inadequate.

Adulthood is about unlearning all of the unproductive and quite frankly irrelevant stuff that you picked up in childhood. It's about figuring out what feels good and right for you and ascending not just in to who you are but also into hour responsibilities. Unlike when you're a kid and you have little control not just over your circumstances but even on who chips in their two cents, as an adult, not only do you get to choose who you keep around you but you get to choose what you do or don't want to listen to and you have to learn how to parse the relevant info and to discard the rest.

You might think that you're parenting you by being highly critical but what you're doing is the equivalent of when I overhear my kids playing teachers and it's this fiercely exaggerated version of discipline. If the caregivers in your life have been critical and lacked boundaries in other areas, it is unsurprising that you treat you in this same manner.

Your inner critic is not the boss or parent of you; you are.

You can choose to continue the pattern or you can choose to break it by growing those younger parts of you that have relied on this backing track to take a parental and authoritative role in your life in lieu of you doing it.

In adulthood, no so-called authority is really an actual authority over you, if all you're doing is mentally handing them the keys to your happiness on a default setting.

There is a you for every year, month, day and moment of your life - you're like a matryoshka doll with all of these younger parts. It is these younger parts of you that have not only created the backing track but still feel unsafe but these feelings will not go away if you keep abandoning you by capitulating to the inner critic. If anything, it will reinforce whatever they're scared of because you're living your own Groundhog Day with your inner critic.

It is time for to support those younger parts of you, not by living in fear but sending reassurance back down the line by having a more boundaried relationship with your critic.

That younger part of you that is frightened, needs your compassion but it also needs you to step up and stop near re-traumatising you by letting your inner critic take up so much space in your head. It's as if they're renting a room in your house but are being given unlimited access to the rest of the house. Now they're putting their muddy feet all over your carpet and generally wrecking the place and then criticising you for being the landlord that has allowed them to and who has a messy, muddy place. If you weren't doing this, it would moan about not being able to do these things (for a time) but then it would know its place.

It is time to reclaim you, all of you, younger and present self.

First step is that you're going to write a letter (or a number of them - however many you need) to your younger self.

JOURNALING: There is a general guide to writing letters to your younger self in the Resources section - read that first. When you're writing the letter, think about the ways in which you think that you've been trying to parent you and acknowledge where this has been heavy-handed at times, and at the same time, be compassionate enough to recognise that you were doing the best that you could at the time with the best of the knowledge that you had. Acknowledge the truth about your inner critic, introducing the character you've created to him/her and explaining what was really going on. Tell them who and what it was inspired by. Let them know that whichever of the 8 roles that they took up, it was for the reasons you identified (their irrational fears, own experiences and poor relationship with themselves), not whatever your younger self blamed it on. You can also tell them what it now means about other experiences that they’ve used the same rationale for and give your younger self as much reassurance and compassion as you can but also let them know that there’s going to be a few changes and again, offer them reassurance and acknowledge why they might find that change scary but let them know how different things are. Soothe their concerns and let them know that they don’t have to fear those same things anymore and that whatever is coming up, you will weather it. You might also find it useful to write a series of letters to key ages of your younger self so that you can get really specific to that younger part of you.

Mini example of a letter: Natalie, I know you've thought that there was something wrong with you because mom said that you were worthless and good for nothing and put you under an incredible amount of pressure but what she said wasn't true. She was deeply unhappy person who had been through some terrible things in her own childhood and I know your hoped that if you could just do what she wanted then her pain would go away and she would be the mom that you wanted, but she couldn't. That is absolutely no reflection on you and I'm sorry for everything I've put you through in my own quest to pursue that. She can't hurt us in that way anymore. Neither can [character's name] - this is what I've named that [describe the voice] in our head, you know the one that says {insert key words and phrases}. I know why we created him/her - it was because we {reference some of the key experiences that you've identified in your journaling}. I understand why we did - we were scared of ever having to feel ________ again or be in a situation where ________ happens again. I know you blamed yourself and I've blamed you too over the years and I'm sorry. I never meant to let you down and I'm here to tell you that I finally recognise you and what you went through and I will do my best to let you know that we're all OK from now on. I know that you're scared but I've got to let you know that we can't do things the way that we have before. Know that I have our back and that we will be OK.