Distinguishing between internal and external lets you know where it's imagination and insecurity at work and also forces you to acknowledge reasons and knowledge. It teaches you about being boundaried.

When we have concerns and we typically tend to doubt ourselves and ignore real threats, it's also vital to ask whether it's fear or knowledge?

If it's fear, it hasn't happened yet and we're worrying about what might happen or projecting past experiences into the present and the future, and then forecasting doom.

This means that your fear feeling is being prompted by a narrative or that your intuition is alerting you to something.

If you're afraid and there isn't external evidence to support your concerns, you can examine which insecurities are playing on repeat and also look at where you're supporting your fears by feeding them with worry and imagined scenarios. When you tend to show up afraid regardless of the circumstances, this is confusing to your senses, which is why you need to challenge your beliefs and relieve your anxieties by intervening on your imagination and that tape.

When your intuition is trying to tell you something but it's struggling to get through the noise, which may include the narrative and imagined scenarios, there will be external evidence of the 'threat' whether you're aware of it or not.

It's important to note that if your intuition is off, you may on some level intuitively recognise that you're repeating a toxic pattern but struggle to connect the dots with the external evidence. There's often an element of not seeing the wood for the trees. A classic example of this is when I hear from readers who believe that they've been choosing different partners because they look different or they have a different problem to a previous partner, or because while they do do some things from the past, they don't do others. They'll focus on something like, 'But he/she is really intelligent / calls / insists that they're over their ex', but fail to recognise that there are some stark similarities between the partners including the way that they're thinking and behaving around them. I've been out with pretty much every single variation of my parents and felt all sorts of fears and yet I didn't notice the core similarities and the familiar thread of unavailability, insecurity, particularly fear of abandonment.

There is evidence outside of you, i.e there is a real threat. Something is happening. Knowledge exists or is out there to be gained. Something has been said, something has been done, or there are cues that indicate a threat that you need to become conscious of.

You could be walking along a road tomorrow and in your own little world and then you feel afraid. You may sense a threat before you are fully aware of the threat. You would look around you or you may become more aware of sounds, maybe facial expressions or movements of others and so forth. These are cues that you pick up without being cognitively aware of the actual chain of events that is occurring including the threat. I've been in crowded places on my own or with the kids and picked up on something taking place around me and I used the cues to be cautious and move myself and/or the kids. I didn't have to know what was going on but I became alert to my environment and once I've felt it was safe, I've gone about my business.

External evidence communicates that something's up. It's stop, look, listen, and don't proceed until it's safe to do so or proceed with caution. It's take stock time. It's assess the threat level time.

Sometimes, if you're of the anxious inclination and you've seen the potential for something to happen but it didn't, you will be very distressed by this because of your internal fears which then cling onto the sense of what could have happened and then you get carried away with your imagination. I've heard so many stories from people pleasers about situations that didn't happen but are still a source of stress for them. They're actually in pain over their own imaginations and what they do is focus on that first feeling and recognition of the potential threat but won't accept that it has passed.

If you're afraid and there is external evidence, this is a call to listen to you and be self-aware.

What you do you need to do, is get a handle on your pleaser thinking. The beliefs, the associations, the assumptions, the automated responses and ultimately, the habit because if you don't, your ability to distinguish between external and internal is hampered so denial will keep taking you down the fear rabbit hole.

DISTINGUISH BETWEEN EMOTION, THINKING, AND BEHAVIOUR. 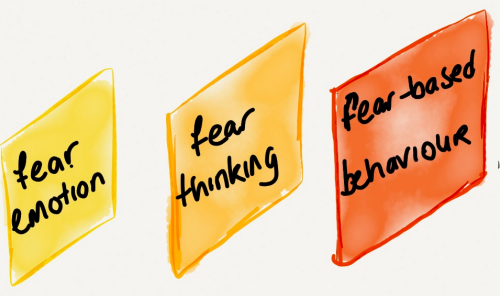 Fear is just a feeling which you can give as much or as little weight to in your life.

The more that you allow your mind and subsequent fear-based actions to run the show, is the greater sense of fear you have. If you're a people pleaser who's very anxious, you need to examine which thinking (emotional reasons) is influencing the feeling because if you reduce the thinking with reasoning and knowledge (introduce some logic) instead of increasing it with imagining various scenarios and doing stuff that feeds unhealthy beliefs and leads to a self-fulfilling prophecy and the attendant disappointment, you will stop trying to control the uncontrollable and feel more in command of you due to intervening on harmful thoughts and behaviour instead of feeding and chasing them.

How much fear-based behaviour you have depends on how much thinking you feed the feeling with.

BACK TO THE PEOPLE PLEASING DIET