Rooting Out Your Fixed Beliefs 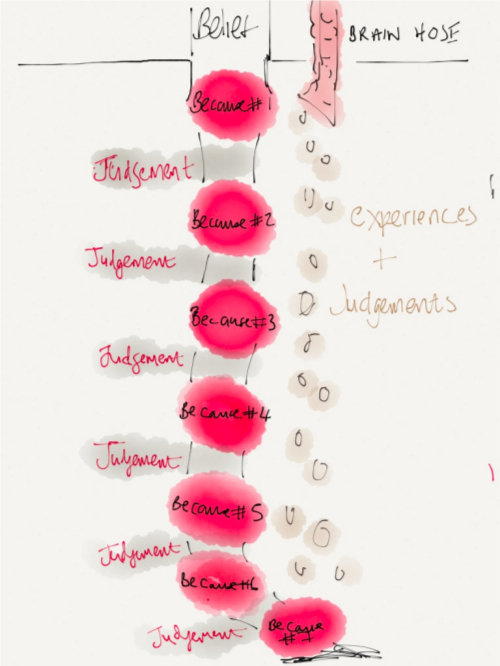 One of the things that can be very frustrating is when somebody keeps asking, 'But why?', and yet there are instances in life where pressing ourselves on why we believe something or are choosing a course of action is pivotal in authenticating the thought process and uncovering our beliefs. If we become complacent and assume that how we see things is the truth, we go down an autopilot, life by numbers route without truly considering the authenticity or value of it.

One of the best ways of doing this is to try the Because exercise where you keep asking 'Why?' until you get down to the root belief on why you are pursuing a course of action or thinking. I remember both my kinesiologist and acupuncturist both gently but consistently probing at me in this way and behind each 'Because' was a judgement that I'd made about me, a person, or situation and each judgement had a reason, even if on further examination, I would realise how unrealistic or unhealthy the reasoning was.

Over the years I've tried this exercise with numerous people and normally by 5-7 reasons, you're getting down to the heart or the root of the matter, and it's normally something that's going to prompt a strong feeling - hurt, anger, upset, incredulity etc - or it's going to be a reason that stretches quite far back that you may not be aware that it actually had anything to do with why you were acting or thinking a certain way.

Often the reason of feeling and believing that you're 'Not good enough' can be at the root of some of your beliefs (but then you can take a root belief like 'I'm not good enough' or 'I'm not loveable' and go through the chain of why's to find out why. If it appears part way through the chain, then it's likely that by the time you get to the bottom (the root), that it's a specific event / experience and this helps you to understand the origins.

You may also find that 'your' reasoning is somebody else's reasoning. For instance, one of your reasons may be, 'Because my father said blah blah blah'. Now that's your father's reasoning and he's neither God nor a higher power plus parents aren't infallible and they surely do eff up. When we're children we treat what comes out of their mouths as gospel and as we grow, we learn to make up our own minds. If your reasoning is someone else's, you need to examine why you're cosigning to this which may give you another tree of work.

You may not actually have any good reason for treating a person as an authority other than automatically complying because you've been used to accepting the points of view of others without question.

Often when you start pulling out your reasons, some will actually make you giggle or cause you to feel alarmed because you may have reasons that you don't actually agree with or that you certainly don't regard as being indisputably true.

Rooting out your fixed beliefs is an opportunity to see where you're accepting points of view, whether it's yours or anyone else's, without question. There isn't a good reason for that but uncovering the beliefs behind it gives you an opportunity to have an honest conversation with you.

You can do numerous versions of your beliefs tree to root out your fixed beliefs and it's likely that if you put them side by side, you're going to see a pattern where it may be that a specific event or experience keeps showing up or the same thought processes. You might for instance find that beliefs from when you're a child start showing up only one, two or three reasons down and so this will highlight where you're still very affected by your perspective on an experience from your childhood. In turn, this gives you some pointers on where you will need to focus your attentions on doing some healing work to reclaim you and lessen the hold of the experience.

When I first started exploring my beliefs, I discovered that a lot of the time when I felt really angry with somebody, it was not only because I was partly mad at myself and I was trying to get them to step up so I could feel less mad, which was a flawed outlook because if I wanted to feel less mad, I could have looked at where I could step up and acknowledged my own feelings instead of trying to clobber them! What I also discovered though is that a lot of my 'Because' was actually about my mother and me not liking the feeling of being 'wrong' because I'd felt so invalidated by her that I couldn't handle criticism and saw everything as a personal attack and a sign of my failings as a person. At the root of it was that if my own mother could find so much fault with me then she couldn't and didn't love me and so why would anybody else, especially since my father wasn't around. When I started to challenge my beliefs about criticism but also about what my mother's own behaviour meant, I could see how I'd kept me in a wounded position with people who gave me the opportunity to right the wrongs of the past with my parents.

You've been taking your experiences and making judgements and watering your beliefs with them and it's all got a bit clogged down there and stifling your growth and you don't want to keep poisoning your sense of self with toxic beliefs.

Once you get down to the root (you may find that there's more than 7 and this is absolutely fine - follow the trail), how does it make you feel?