The Circle Of Blame & The One False Move Mentality 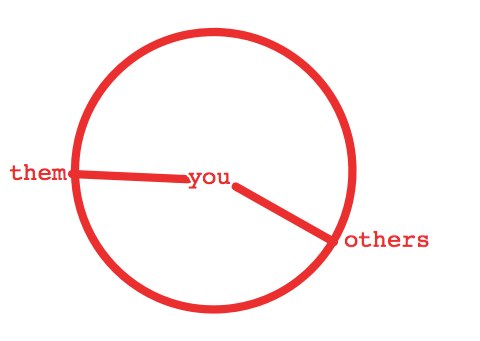 When you have a disposition to blame you and it's actually your default setting, all routes lead back to you. Somehow, you always end up at fault, even if there were 10 other people involved. You worry about your part in something to such an extent that it clouds out the reality of Other People's Behaviour. I've realised that when we want to blame ourselves for something, we can pretty much find any reason to do so no matter how ridiculous.

Blame is very much about taking what other people be or do and their inadequacies and then equating this to being about a deficiency in you or something that you just had to have been or done to 'make' them be or do whatever it is that you're now seeing yourself as at fault for.

It is also this One False Move Mentality (see more on this on Baggage Reclaim) - this is when you convince yourself that you made one false move that caused a catastrophic chain of events, so in essence, you believe that if you'd been or done something that something wouldn't have happened and you would have experienced a different outcome.

You're putting too much of you into things. It's like the only person you trust to be at fault for anything is you. You are just not that powerful or influential that one move on your part could have made a person be someone entirely different. What you could have done differently is about the actions you could have undertaken that would have honoured you as a person, even if it meant telling them to jog on. Often what you could have done differently is to stop blaming yourself for their actions and take responsibility for the element that you can control - you. When you do this, you don't take twenty things that someone else has done and park it at your door.