Understanding the Concept of Balanced Ownership 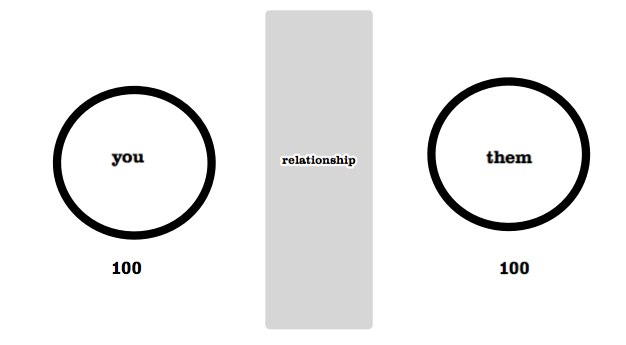 In this class: Help with critical skills responsibility and accountability, plus it also ties in with boundaries.

Many people believe that relationships are 50:50. The idea is that each person thinks that they have to chip in their ‘half’, which essentially means you can leave the other 50% out of the relationship and that you’re automatically relying on the other party to make up the shortfall of things that you don’t need to be or do. You can see how easy it is with this thinking to believe that if you’re ‘lacking’ in some areas that the other person can ‘make this up’ and vice versa, which is also working under the assumption that for instance, whatever you’re ‘lacking’, you’ve magically managed to find someone else who has the missing parts. It’s also assuming that they know automatically which missing bits you have and that they’re almost under obligation to come up with them. Of course, it doesn’t work out this way! I mean, what if they’re thinking the same thing that you are and you don’t have the shortfall thatthey’re looking for?

Interestingly though, the same person who thinks that relationships are 50:50, will decide that it’s all their fault or all the other persons fault if something goes awry.

Your job as someone who is going to improve their self-esteem and keep building on it day after day (like putting your loose change into a self-esteem piggy bank each day by treating yourself with love, care, trust, and respect, is to be yourself and live your life authentically. This means that if you’re honest and claim that you value it, you don’t show up to situations, and decide to be half honest because someone else is around or because the other person doesn’t value honesty.

This means you need to put 100% (or as much effort as possible as let’s be real, none of us are perfect) into being you and living your life authentically instead of trying to find others to validate you and top you up. This means that, for instance in relationships, or really in any situation, it’s 100:100.

This doesn’t mean that you do all of the loving and effort for a relationship or a situation; it means that whether it’s a romantic relationship or otherwise, you have to take responsibility for you at all times, be you, do your best without compromising yourself and your values, and treat you with love, care, trust, and respect. It also ensures that you conduct yourself with integrity and respect others.

You are not a situation or a relationship, unless of course you’re 100% on your own. You and whoever else is involved have to be your individual selves and the relationship that arises is in some respects an intangible entity of its own, where if it’s a genuinely mutual healthy partnering, it will be reflected in the results. It’s also safe to assume that in a general situation where there is more than just you and there may be several people, you’re not the organ grinder or the blame cog that turns everything wrong. 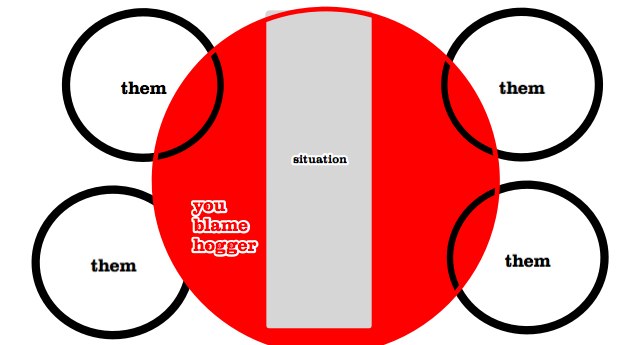 With balanced ownership, you can own your own actions and you let others own theirs. It also means that when you make an effort, not because you’re trying to convince and convert people to do what you want, but because this is your way of living your life in line with your values, you can see when someone is detracting from your life and not making an effort. It doesn’t mean that you won’t be irritated or upset by their actions, but you’ll know that you’ve got you covered and that it’s not about you.

It also means that you don’t run around blaming yourself for Other People’s Behaviour because you can distinguish yourself from the other party/parties, instead of being codependent because you’ve merged into them or seen their actions as some sort of extension of you.

It is focusing on yourself as inadequate, instead of focusing on being your best you that makes it easy to engage in distorted ownership (blame) and to also lose sight of yourself in situations. Having boundaries and recognising where there is an issue, is also much easier because you’re not focusing on appeasing others, which is a half-life at best, and instead you are focused on getting on with your life and engaging in a mutually fulfilling experience. In turn, maintaining balanced ownership and remembering who you are instead of trying to figure which version of you will best fit this situation, also ensures that you live by your values.

When you go to work, and you for instance, work with a team of six people, you don’t decide that you’re only going to do 1/6th of your workload and put in 1/6th of your energy, or claim that you’ve done the best that you can with your 1/6th ‘radius’. You’re employed to do a job which means that you have to do your job to the best of your ability. If other people within your team don’t perform, this doesn’t mean that you’re going to go and do their job and it does mean that if there are team issues that you will have to evaluate what your part, if any, is in that, but if you know that you haven’t been selling yourself short, you have less to worry about, even though you will of course be peeved by the issues on your team. What you wouldn’t do is go “It’s all my fault”, which isn’t responsibility. Nobody, not you, not them, can learn from a situation if you distort with blame.