What Assertiveness Is (& Isn’t)* 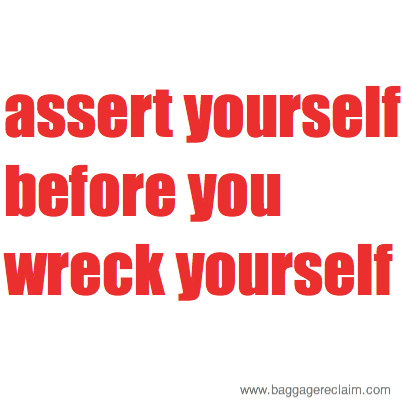 Assertiveness is very much about confidence which you have when you treat you as someone who is worth the effort and sees themselves as a person of value – good self-esteem. The purpose of this class is to demystify assertiveness which is often mistaken for aggression and avoided in favour of being passive and passive aggression which can end up creating a lot of problems for you especially when you start to feel perpetually victimised and misunderstood. It will also provide some tips, tools, and inspiration.

Assertiveness is communicating through words and actions your needs, wishes, expectations, desires etc with respect and confidence.

Aggression is not the same as assertiveness because this involves someone doing these things by force, manipulation, and essentially disrespect.

Passive aggression is another form of aggression where instead of being assertive or directly aggressive, you appear to go along with something (be in agreement) and undermine it by doing something different so that you can achieve your own aims without being assertive.

Passiveness is what happens when you tend to take a passenger role in situations and do not communicate your needs, wishes, expectations, and desires, and yet often expect them to happen anyway and then end up feeling helpless, victimised, powerless and taken advantage of and abused.

It is the crux of why you will have issues with having and maintaining boundaries – even when something is not what you want and is actually crossing the line, you accept and allow it because you don’t have an active response or resistance. Even if you voice an initial concern or vaguely communicate your discontent, the lack of active response and resistance to what may be highly inappropriate or dangerous behaviour on the part of another person ends up creating pain for you and impacts your self-esteem.

When you are used to being passive, you hope that with your passive response that you’ll be able to handle the situation and you often opt for the passive response because you’re also trying to avoid rejection, conflict, and even criticism. It can be why you end up voicing discontent but then sticking around, which undermines the discontent that you’ve conveyed or even negates it. It feels like you’re having an active response by ‘saying’ something but you actually may not even be saying as much as you think you are if you’re not being direct, but more importantly, the active response would be to communicate it with both actions and words that match, which would have you assertively handling the situation.

Being passive can cross over into passive aggressive territory when you engage in non-compliance and veiled aggression stemming from feeling unhappy with the results of being passive but not knowing what to do. It’s also not unusual to by and large be passive, but end up acting like a pressure cooker simmering and then when you do decide to ‘assert’ yourself, you have so many offences pissing you off, that you end up coming across as aggressive. Of course, in the aftermath of losing it, you feel bad about being pissed off and how you expressed it and then you decide that being ‘assertive’ is ‘bad’ whereas actually the issue is that if you don’t assert yourself consistently and only roll it out for special occasions, you’re likely to go OTT.

Starting to assert yourself and practicing it as a habit will do wonders for your confidence and your self-worth – nobody ever feels like a person of worth when they’re not standing up and staying standing up in their own life and making their voice and actions known, even in the face of hearing or experiencing something that they might not like. 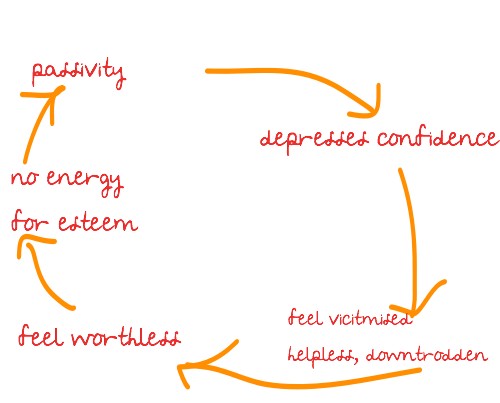 You are highly likely to have an issue with being assertive if you were bullied in childhood by peers or family. You may also have a problem with being assertive if you’ve experienced situations where you feel that you were assertive but that you were penalised for it or have been taught that what other people might consider to be positive attributes such as being outgoing, intelligent, inquisitive, curious, ambitious etc. are actually ‘negative’ qualities in you, possibly because it didn’t suit the person’s agenda, they didn’t know how to ‘handle’ you, or your strengths ‘made’ them feel inadequate. So they try to dampen your spirit and effectively steal your wind.

You end up being left with some unhealthy beliefs about assertiveness such as:

If you have been bullied or certainly have felt like a victim, you tend to be at extremes. 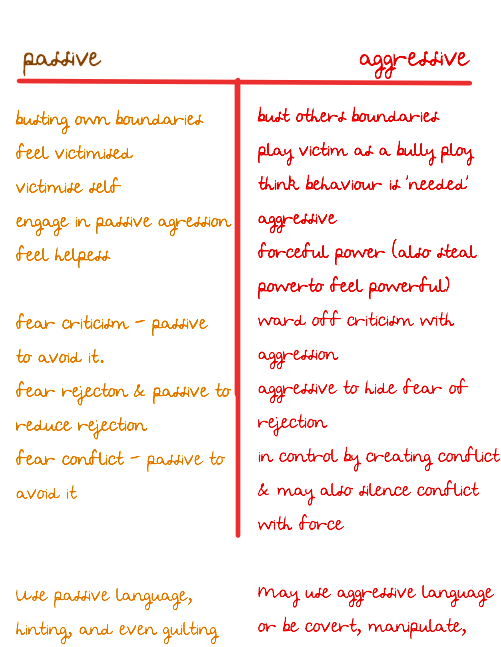 What you can see immediately is that neither passivity or aggression are healthy modes of behaviour. One mode is perpetual invalidating of the self and the other is the invalidating of others in order to ‘validate’ the self. You will also note that each mode is often extremes of the same unhealthy behaviour.

Whatever has happened in your past, it has changed how you feel about the right to have a voice and actions that basically look out for you and help you along your path. You currently have beliefs about being assertive such as believing that assertiveness is aggression or that you’ll be penalised if you assert yourself and these beliefs are limiting what you communicate about your needs and wishes.

Reading many stories and comments about passivity, I’ve found that people who are passive have unrealistic expectations of what others are supposed to do when they assert themselves. There’s an expectation of a reward and easiness.

It becomes “I asserted myself so people must understand and agree with what I need/want and do as I expect.” When this doesn’t happen they wonder What’s the point? The most common issue around this is the area of asserting boundaries and expressing what you want or your discontent / displeasure with something. You may get upset and angry that people aren’t on board with you asserting your boundaries or breaking their neck to rectify a situation or agree with what you said.

Assertiveness isn’t about making people do what you want and agree with what you think and say, which is actually just another version of validation. Your job in being assertive is to communicate your needs, wishes, and expectations even if the net result is that the person is unable to meet them and you have to then assert yourself to move on to something or someone else that can do these things and/or do them yourself where appropriate. There is a huge difference between being assertive and trying to make yourself ‘right’ in every situation by trying to get people to see your point of view. Sometimes you have to realise that you’ve made your point so let it stand and let the chips fall where they’re going to fall. Your opinion is out there – it might not be agreed with but at least you’re not festering with a load of frustrations that haven’t been voiced.

It’s also pivotal to recognise that one aspect of passivity is often feeling discontented with certain people around you but not communicating it. If you do choose to communicate it, it can sometimes boil down to “I don’t like who you are or what you do” and the expectation that you likely hold privately is that they will do something to change and rectify the situation. But if you don’t like who someone is and what they do, you go your own way and leave them to their devices. The unrealistic expectations and your own fears and self-worth mean that instead, you often remain passive but still having the same expectations but being afraid to voice your discontent because you’re afraid that if you tell someone who you don’t like or don’t like their behaviour that you don’t like them and don’t like their behaviour, that they’ll leave / won’t change and then you’ll feel rejected, even though it’s not rejection.

It’s crucial to recognise as you continue your journey of building your self-esteem, that it’s all very well trying to be assertive but unless you agree to change your mentality about you and conflict, feedback, speaking up etc, you’re going to shoot yourself in the foot.

The passivity may ‘work’ for you in that you end up remaining in your uncomfortable comfort zone but it’s not working working for you and the funny thing is that whether we assert ourselves or we don’t, people are not always going to agree with, like, or love what we say or do. You can be a doormat feeling victimised and still have people not jumping to your beat while also not having your needs and expectations met and feeling like crap and no doubt beating yourself up, OR, you can start to assert yourself, stand up and be counted, and yes you might experience conflict along the way, but at least you’ll be someone who is treating themselves with love, care, trust, and respect, that holds values and is worthwhile, and is having at least enough confidence to try.